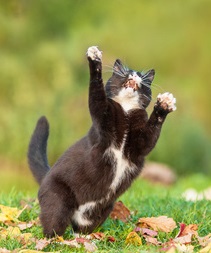 Oh, we’ve been merry of late.

The Spanish have sailed eastward, so will not land near us.

Nero brought this newes.  His master has returned from Portsmouth, where he went to aid in the defences.

Our ships fought four times with the Spanish as they came along the narrow sea [the Channel].

We cats heard the fight for our island [Wight].  Then, when the Spanish lay off the coast of France our ships attacked them, doing some hurt.

“And would have done more, had they powder enough,” sayt Nero.

All the Mad Cat would say, when arrkst in jest what more the Queen Cat of Heaven has told him, is, “I know what I know.”

Linkin sayt his master had writ that he saw the Queen’s Majestie, most richly bejewelled, upon a white horse.  She made a fine speech to hearten her soldiers.

“She’d hearten them more if she paid them,” sayt Nero.

We screeched at that.  Then we loosed our wicked tongues on Lord Lester [Leicester] who commands the soldiers.  Some arrkst, “When did he ever win a fight?”

I called, “Pray, friends, be respective.  Lord Lester has a very good place in Her Majestie’s household.  He alone is permitted to seize her by the scruff.”

Linkin sayt, “She has a young Earl now that she keeps very close.”

“She loves them young,” sayt my sister.  “She’ll be calling for our Earl next.”

I liked not that word “our”.  But I made the best of it by showing I know more than my sister does.  I offered scandal, and all pricked their ears.

First, I told of the old Earl and his maggot, as I have writ before.  Then I sayt, “We need not fear that our young Earl will be as mad as his father.  The old Earl did not put our Earl-kit in his mother’s belly.”

“How know you that?” all cried.

In truth, I heard a whisper when I was a kitling.  But I sayt, very grand, “I discovered this by arithmetickal and astrologickal calculation. 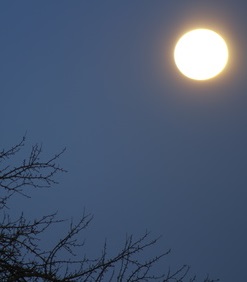 “After our queens hoist their tails, they watch the moon wax fat twice or thrice before their kits come forth.

“But women are slow in their doings.  They must watch the moon wax nine or ten times.  Our young Earl was birthed in leaf-fall, not long before that wondrous night when ghosts creep about.

“And where was the old Earl ten moons before?  He had not wit enough to hide his papistry, so was locked in the Tower.”

Oh, what joy it is to spread slander from behind a mask of virtue.

The queen cats were mazed.  “What?” they called.  “Ten fat moons?  To bring forth one yowling little stinkard?”

“But,” sayt the kitchen cat from my household, “were our Countess hot enough, she’d have found a way into the Tower.  Clawed at the door till the gate keeper gave her admittance.  Or leapt onto the leads [roof] and down the chimney.”

“True,” sayt another.  “Women may be slow, but they’re as tricksie as we.”

Then all ran off, saying they hoped to hear more scandal soon.

I arrkst Linkin, “Did your master see my lord with the Queen and her soldiers?”

“He sent no report of it.  But I heard tell your old Catlick lord was there.”

“The Countess’s father?  He that laps up the pap of Error but shows clean whiskers to the Queen?”

“The same.  He came with his sons, and a troop of horse [cavalry].  He sayt he will hazard all he possesses in Her Majestie’s defence.”

That was passing strange.  Within the walls of my household, ’twas whispered that one of the old Catlick lord’s brothers sailed with the Spanish.

Whatever the truth be, great folks are suttle.  For which I offer thanks.  It come to me that whether the Spanish conquer or no, my household and my place in it are safe.

There are no real grounds for doubting the legitimacy of Gib’s lord, the 3rd Earl of Southampton.  However, the cats’ lively view of how his mother the Countess conducted her conjugal visits might help explain a myth.

In 1790 the naturalist and antiquarian Thomas Pennant (1726-1798) published Some Account of London, which ran through several editions.  In it he writes: “A very remarkable accident befell Henry Wriothsly, earl of Southampton, the friend and companion of the Earl of Essex in his fatal insurrection; after he had been confined there [the Tower] a small time, he was surprized by a visit from his favourite cat, which had found its way to the Tower; and, as tradition says, reached its master by descending the chimney of his apartment…”

Thomas Pennant is writing about the 3rd Earl, and suggests that his “Tower portrait” with a cat might be the foundation of the tale.

Gib’s memoirs might also be part of the foundation.  It’s unlikely that I’m the only person in over 400 years to have deciphered them.  Even though the cats were talking about a different Earl (father, not son) and his wife (not cat), they did refer to a chimney.

Elizabeth I delivered her famous speech to the troops in August 1588 at Tilbury, on the north bank of the Thames.  By then the Duke of Medina Sidonia, unable to make any useful connection with the Duke of Parma, was returning to Spain.  The route was to be up the east coast of England, around Scotland, and down the west coast of Ireland.  A combination of fierce winds, wild seas, and unfamiliar coasts turned his withdrawal into disaster.

The Duke of Parma, who had his army at Dunkirk but was blockaded by Protestant Dutch ships, never left port.

Viscount Montague’s brother William Browne sailed with the Armada, as did other Catholic Englishmen.  There were also Englishmen in the Duke of Parma’s multinational army.  William Browne didn’t survive the battle of Gravelines “off the coast of France”.

Robert Dudley, Earl of Leicester, died in September 1588, aged about 56.  The Queen’s “young Earl” was Leicester’s stepson, the 22 year old Robert Devereux, 2nd Earl of Essex. He’d been high in her favour since 1587, but no-one ever occupied the place in Elizabeth’s affections held by Robert Dudley, whom she’d known since childhood.