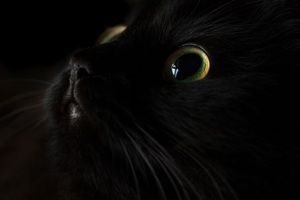 As if my lord’s dressings were not performances enough, we’ve had another.  Many came to see it.

Even that cunning rogue Nero crept in, and concealed hisself in a dark corner.

My lady Moll was here and I took my seat upon her lap, beside my lord.

When refreshments were served, I sayt to Nero, “Best you be off before any see you and take you for a fat rabbit and set a dog to catch you for their sport.”

Though in truth, the place did stink so high of strangers it were a very cute hound that could nose Nero out.

Nero snapt a wing of fowl that was tossed to me and leapt away, muttering of his happy apprehensions.

I heared my lord say, like unto a kitchen wench, “Ooh look!  That cat has no tail.”

I fear my lord doth common grow.  If I catch Nero in my lord’s bedchamber his fur will fly, I promise you.

But I go too fast.  I must set this down more orderly. 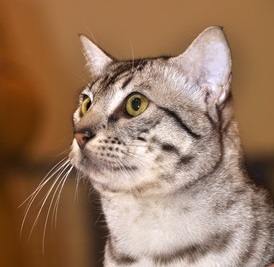 We have seen a play.  At first I thought: What nonsense is this?

For it seemed that the players did nowt but jet it about, aping their betters and telling each other things that surely all with brains would know before the story started.

Then it come to me that this was easy work for a poet.  You need do no more than write the words, while others prance around and voice them.

And if, at the end of the performance, some call your tale fool you can say:  Friends, the fault is not mine.  I writ well, but those clowns could not carry it away.

Were I not sworn to tell no more tales for the lackwit cats here, I’d make a play.  Certes, there can be no great art to it when you see the puffed-up parasites that pen them.

Alas, the maggot in my head will not be still, and I fear that even as I write this his rival may be buzzing in Nero’s brain.

I recall my maggot whispering of revenge when the fool cats who scorned my most excellent romance called for a tale of ghosts.  And how Nero pricked his envious ears when they did.

Does Nero now hope to make a play?  And will there be a ghost in it?  Happy apprehensions indeed.

My lord has had another dedication.  You never read the like.  It comes from that common player who writ of the Queen of Love molesting an unhappy boy.

His new piece tells of a wicked man who scruffed a woman who was not hot for him.

And the rogue contrived an insult to me.  Yes.  He called that wicked man a foul night-waking cat.  After which I read no more.

Was the rogue ever in this house?  Was his the filthie cloak that so offended me I raised my tail and set my mark against it?

Here’s what he writ to my lord:  “The love I dedicate to your lordship is without end; whereof this pamphlet, without beginning, is but a superfluous moiety.”

“A superfluous moiety.”  That’s to say, too much of not much.  How true.

“The warrant I have of your honourable disposition, not the worth of my untutored lines, makes it assured of acceptance.”  (Or so he hopes.)

“What I have done is yours; what I have to do is yours; being part in all I have, devoted yours.  Were my worth greater, my duty would show greater; meantime, as it is, it is bound to your lordship, to whom I wish long life, still lengthened with all happiness.”

What a claw-poll.  He wants money.

“Well,” sayt my lord, “at least he kept it short.  What say you, Bevis?” (Bevis is the name my lord and his lady sister gave me when we was kits together.)

I offered a performance of mine own.  I hoist one leg in the air, and licked mine arse.

My lord took my meaning, and laughed.

He’s gone to the city, but I’m content to bide here.  I have plans.

William Shakespeare’s second long narrative poem Lucrece (his follow-up to the previous year’s Venus & Adonis) with its dedication to Gib’s Earl was published sometime after 9 May 1594.

Both dedications to the young Earl have been pawed through by far more learned readers than Gib and I.  There may be genuine gratitude in this one.  There had been fears of another outbreak of plague in the spring of 1594.  The London theatres, reopened in December 1593, closed again for a couple of months.  However, the plague had pretty much burnt itself out.  Shakespeare could resume his budding career.

It’s possible that the young Earl helped him through the lean period.  Otherwise Shakespeare (by now 30 years old, with three growing children to support) might have had to give up his poetical ambitions and get a proper job.