Nero came by to continue his true relation of the voyage.  Now he has a secretarie, I fear it may never end.

“We was not long at sea (he sayt) when another storm scattered our ships.

“That night we heared shots fired by one in distress, and went to give what aid we could.  The Mathew – a Spanish ship refitted for our purpose – had lost her foremast and her bowsprit, and her mainmast was loose.  All were in great peril of their lives.

“She carried six or seven hundred mariners and gentlemen.  Too many to take onto the Garland, but our Earl went in our pinniss [pinnace] to beg the captain to bring hisself and as many as he could to us.

“The captain sayt: No.  As I believe all knew he would, for this were a matter of honour.

“It’s not in our Earl’s nature to abandon his friends.  We passed that day with them while all strove to make the Mathew fit to sail home. 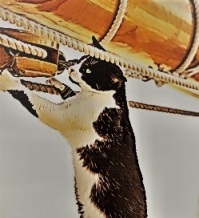 “I called to a cat who was making a survey of the damages that she could leap into our pinniss.

“But she sayt that were she to flee, it would strike such terror in the mariners they would give theirselves up for lost without more ado.

“At end of day we had no choice but to leave them to Fortune and set course to catch our fleet.  And so we came to Finistair [Finisterre].

“There we heared Essicks’ new ship had taken so much water they left off pumping and bailing, and sought to stop the leaks with pieces of beef and linen cloths wrung together.

“We had but the remains of our fleet.  The Mathew gone, the Andrew feared lost, and no word of our Rear-Admiral Sir Water Rawly.  We later learnt his mainyard cracked, and he was forced that night to run westward before the wind.  Some twenty sail followed his light, not knowing owt was amiss.

“No hopes now of burning the Spanish fleet as it lay in harbour.

“Then Sir Water sent word that he’d met with an English captain who told him the fleet had gone to waft the West Indian treasure ships home through the iles of Asores [Azores].

“All now know this captain was a villain.  Seafarers, like poets, may be free to fable, but he told a wicked lie.  He was from Southampton.  Need I say more?

“We stayed among the Asores for some days.  Most dwelling there are Portugals.  Their islands were usurped by Spain, so they bear us no malice.  Sir Water joined us, and all took on vittles.

“To my remembrance, ’twas then we saw by moonlight that piece of falseness men call a rainbow.  They marvelled at it, saying it was the colours of fire.

“Any cat could have told them it had many hues of blue.

“About this time there was a calm, and with it great heat.  I lay baking and breathless in what shade I could find.

“They few men that could swim slipped overboard to cool theirselves.  When they clamb back I – also hoping to be cool – lay in the puddles they left on the hatches.  That did nowt but salt and boil me, and cause my fine black coat to rust.

“There was word that the treasure ships would pass more southward of the Asores than was their custom.  Or might not come at all.  Few believed that, and we ranged our ships from north to south to give them warm welcome.

“Next, we had newes of a great ship sighted, so the Garland was commanded westward.

“In the dark of night when men can see nowt, mine eyes and nose told me the Rainbow and two more were with us.  Soon I lost them.

“Then we heared the sound of guns.  The treasure ships were come!”

Here Nero brake off, and sayt he wisht to take refreshment.

My niece sayt, “You’ve not told us of the question put to the learned doctor that touched upon our Earl.”

“A small thing,” sayt Nero, very grand.  “A mere interlude.  First, I mean to tell of action at sea.”

The ships that Nero refers to as the Mathew and the Andrew were the San Mateo and the San Andrés, captured the previous year at Cadiz.  The idea of a full attack on the port of Ferrol had been abandoned, and the fall-back plan was to use these two ships (which the Earl of Essex referred to as “great carts”) to escort fireships into Ferrol to burn the Spanish fleet.

Without them there was no hope of achieving anything at Ferrol, so Essex moved to Stage 2 of his fall-back plan: attack the treasure fleet, and make some raids upon the Spanish settlements in the Azores.  (His original strategy had included the capture of the island of Terceira.  That was no longer possible.)

It was at this stage, as Nero indicates, that things became confused and confusing.

The Mathew’s captain was Sir George Carew/Carey.  They made it to the French port of La Rochelle (where he estimated around 4000 people visited his ship), and thence to Portsmouth.  I understand the Andrew managed to return to England, too.