My haunting of the book box served me well.

There came a day when the master gave a dinner for his friends.  They brought their kits with them.

And after the master and his friends had eat their fill, they went into the master’s chamber for sober talk.

Or so they wished us to believe.

Linkin and I guessed they meant to speak of things not fit for children’s ears, so he followed soft behind.

Little dog Wattie, in hopes of sport, stayed with the master’s kits and their playfellows. So did I.

Before the mistress left us she oped the book box, and fetched one out.

She gave it to the master’s daughter, saying she could read a goodly tale to her friends while they ate of their nuts and sugar-suckets. 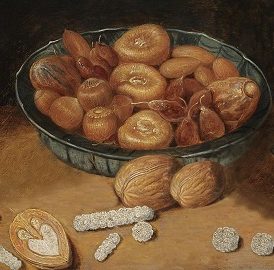 Then the mistress, doubtless afeared she’d miss hearing a choice piece of scandal, snatched up her wine cup and hasted away.

She forgot to lock the book box.

Two of the master’s kits rose up so swift you would have thought they were cats.  They flew straight to that box, and began to hunt within.

The maidservants with us did nowt to stay them.

The master’s boy sayt, “Here’s the one with the bawdy tale in it.”

The girl sayt, “This here has more pictures.  Goodly ones of wicked Irishes.”

She bore it to the table, and laughed when I leapt up to see all.

What a wonder that book were!

It told of thieving, murderous men called woodkarn [wood-kern].  So viperous are they that not even Saint Patrick who banished the snakes could make them civil.

And how the pictures joyed us!  Viz.

Woodkarnes from Saint Filcher’s den stealing cows and horses from loyal Irishes, and burning their house.  To the great dismay of a hen that saw all.  She was fortunate not to be roasted. 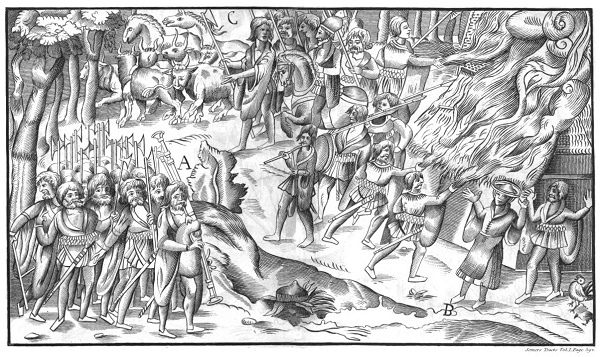 Then we saw pictures of English soldiers killing rebelsome Irishes and cutting off their heads.

And a banished rebel alone in the forest with nowt but wolves to talk to of his misery.  In Latin.  For, as one kit sayt, not even Irish wolves would trouble to speak Irish.

But the master’s daughter kept the best for last.

This was the spectacle of noble Irishes at dinner.  Mack Swine and his lady.

The board they ate off lay on the ground.  Sure, a cat could do well at such a feast, but the churls had no cat.  Onlie a thieving cur.

Two rogues were cutting up a stolen cow.  And because the Irishes have neither pots nor ovens, two more were boyling meats in a beast’s own hide!

A greedy priest was sneaking up behind the lord and lady.  His name was Friar Smell-Feast.

And a Bard (a kind of fool poet) was giving out his verses.  Beside him sat another rogue, making musick.  And two more stood near, lowering their breeches to show their bare bums.

They spake in Latin too.  It was writ small, but the master’s boy could read it.

One was saying he’d been taught this behaviour by his parents.  The other sayt he learnt his from useless old folks, too.

That set all screeching.

Then, there being but one sweetmeat left (I’d hooked it, but not ate it), the master’s daughter sayt it were the prize for whomever guessed what those Bare-Bums were about.

One kit sayt they meant to drop their turds in full sight of their lord.

A maidservant sayt: “They’re showing the Bard how well they like his verses.”

A saucie little girl sayt, “They serve as the Irish lord’s trumpeters.”

She was awarded the sweetmeat.  Then she swore she would give it to the first who  honoured their parents in this manner.

A little boy laughed so hearty he choked on his sugar-spittle and had a fit of coffs – which the others called a coffin fit, and offered to cut off his head as the cure.

That made him laugh more, then puke on the floor.  A maidservant went for a bucket and mop.

All the kits, still screeching, ran off with Wattie to play some fool game on the stairs.

The book was mine, but I knew I would scarce have time to read it.  In truth, I eyed but a few pages before another maidservant laid hastie hands on me and book together.

She put the book into the box, and set me upon its lid so none could guess it had been open.  I sat there most loyal and dutiful.

But I’d read enough to make me think that Ireland could be a very paradise for us cats.

The book that all found so hilarious is John Derrick’s The Image of Irelande, With a Discoverie of Woodkarne wherein is most lively expressed the Nature and Qualitie of the said wilde Irish Woodkarne…for pleasure and delight of the well-disposed reader.

Written in 1578 and published in 1581, it’s a satirical anti-Irish anti-Catholic piece of  propaganda that also aims to glorify Sir Henry Sidney’s third stint in Ireland and his second as Lord Deputy (1575 to 1578).

The first part is a verse history of Ireland and the benefits of English rule. That’s followed by a description of wild Irish ways and a series of illustrations with brief explanatory verses below them.

Only one copy of the book with a full set of illustrations survives.  It’s held by Edinburgh University Library.   The pictures with their accompanying verses are also reproduced on Wikisource.