Such a throng of cats was there.  Many had come from afar, walking by night and hiding by day for their greater safety.

This was a thing we’d not foreseen, but (sayt Nero) the more the merrier.

The cats who dwell hereabouts sayt they would chase away these incomers as soon as our entertainment was done.  They feared they’d take our places and steal our vittles.

I hoped they would spread our fame abroad.

“Say rather, spread your false imaginations,” sayt the Mad Cat.

And though our play is fool, when I stepped forth as hungrie Lion Rampant and saw many in our audience rise and claw the air in like manner, my heart swoll within me.

One thing we did forget.  Viz, how kitlings love to imitate cats.  And how apt they are to learn.

The kitlings were to show, in silence, what we told.  Save our Maggot (my niece).  For her I writ two little songs.

But the kit we’d chose to play the cook took it into his head to die with speeches.

He stood like me (Lion Rampant) and squeaked out to his fellow that played young Ox-Foot, “What, my lord, will you murder me?”

I made haste to hold him down, so I could give out my lines on the taste of his blood.

His fond mother, seated near, mistook his cries and my intent.  She came at me very fierce.

But I’m quick in my wits, and have read many play books. I sayt:

Good cook, forbear, you have already died!
Madame, away with him!  Bear his corpse aside.

She dragged him off, he squeaking all the while, “Ox-Foot has killed me.  Alas, I am dead.”

Likewise when two kits – young Ox-Foot and Old Hamton’s wife – enacted the killing of Old Hamton.  The kit that played Old Hamton rose up and fought with them instead of dying quiet.

But I believe our audience saw nowt amiss.  How they beat their tails upon the earth to match the measure of our verse!

And doubtless they saw the frensied kits now flying back and forth (unrehersed) as servants and the like.

A woman came from a cottage nearby and flung a piece of coal into our Field.  All hushed then, lest a dog be loosed at us.

But, Ox-Foot and the Queen having spake their last, I thought it best to die without much ado.

A tide of kits (as imps from hell, come for our souls) swept across the ground.  The kitchen cat gave out Young Hamton’s speech, and so our play ended.

Then Nero sprang up and led all in song. 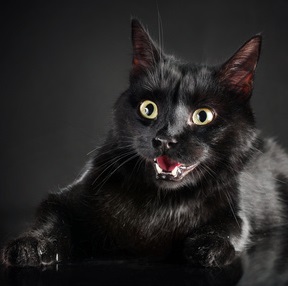 He sang, “Who was it killed the poor cook?” and all replied, “It was the Earl of Ox-Foot.”

And so on, with many questions too lewd to be writ here.

“And who would Ox-Foot next have killed?” Nero sang at last.

I called “Our own Earl!”

A cottage door swung wide.  A shoe came flying at us.

All scattered then.  But not before two stone-cats had run to the shoe and set their marks on it.

The Mad Cat sayt, “Your goodly pageant being done, now see what mischiefs you have wrought.”

Our kitchen cat sayt she never had such a time in all her life.

And I never had such great applauds.  But I believe I may be full of shame on the morrow.

Gib describes his play as fool.  However, a theory that the Earl of Oxford was the Earl of Southampton’s biological father has currency among some who believe that Oxford wrote “Shakespeare”.

The notion that the Earl of Southampton was the biological father of Oxford’s son has surfaced too.  (It’s complicated.)  But could Gib’s false imaginations have contributed to this?  As I’ve said before, I’m surely not the only person in the past 400 years to have deciphered his writings.