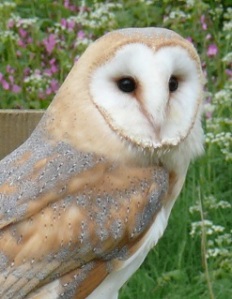 We met near my sister’s barn to reherse our play.

There was none to see but an owl that lodges with her.

Linkin has this next by heart, and will spread it abroad:

The Most Lamentable Comedie of the Earl of Ox-Foot, containing the pitifull murders of a cook and the old Earl of Hamton, and the bloodie ends of Lord Purrlie, the Queen, Ox-Foot, and his Hungrie Cat, Lion Rampant.

To be played in our Field by the Right Honourable the Earl of Southampton his Cats.

All know their speeches, but we wished to try ourselves with the kitlings who will enact in silence much that we tell.

We have but one Maggot now, because my sister’s other kit was trod on by a fool cow, to her great annoyance.

Enter hungrie Lion Rampant (me), who tells of Ox-Foot’s return from Italy, and of his killing a cook.

Three kitlings make a show of what I tell.  Two practise fighting. When a third joins them, the black kit (like to Nero, but with a tail) kills him.

Lion recalls the taste of the cook’s blood:

When first I lapped this sanguine sauce, it seemed
I sat at Purrlie’s laden board.  In life,
this cook had farced old Purrlie’s pigeons fat,
made garnishes, stirred glistering gravies,
and dressed baked peacocks in their bravest plumes;
slipped scarlet lobsters from their shells.  Luxury.

Then he boasts of Italy’s hot queens and his singing boy (a tender kitling), and calls on all to marvel at his tail new-trimmed to let his farts fly free.

Thence to the pirates who attacked his ship (a fight enacted by kits) and stole his Italian treasures.  And how he hates his ugly wife and daughter.

All in Nero’s mighty lines, that I do so envie.

Enter the Queen (my sister).  She greets Ox-Foot as I have writ before.  Exeunt.

Act II.  On a roof, for which the wall at our Field will serve.

Enter Young Hamton (the kitchen cat), complaining of the stinks of starveling poets.

Enter the Ghost of Old Hamton (my sister) with Maggot (my little niece).

While the Ghost calls for revenge, three kits below the wall show Old Hamton lying inebriate while his wife and Ox-Foot drop something in his ear.

Now he hies him back to hell,
but we maggots know full well
all the vices flesh is hire to:
it was Ox-Foot that did sire you.

Act III.  On the ground.

Enter Young Hamton, with Lion.  Lion tells him Ox-Foot has come to visit, feigns to leave, but hides instead.

Hamton says he knows not what to do.  Kill Ox-Foot now?  Or, if Ox-Foot is his father, why trouble hisself?  And did the Maggot speak true, or was she a devil come from hell to lure him to damnation?

Hamton runs off to find Ox-Foot, pausing to tell all (save Purrlie) that he fears this offered bride may also be his sister.

Purrlie, believing hisself unobserved, boasts of all his honours and employments, of his kits wed to Earls, and of the fine fur lining in his robe:

Now is this coat I took as bribe from rats
made glorious by the pelts of slain cats.

Act IV. On the ground.

Enter Hamton with Ox-Foot.  Ox-Foot tells Hamton he cares not whether he weds his daughter.  But he lacks a son, so he begs Hamton to scruff his ugly wife for him.

Lion sees his chance to be avenged on Ox-Foot and Purrlie together.  Oh what joy, to set one at the other!

He bites Purrlie’s tail.  Purrlie looks out from his hiding place.  Ox-Foot, knowing his plot to get a son is discovered, kills him.

Purrlie dies slow, as they do in plays:  Will you murder me? And: Alas, I am slain!  And: Farewell, fur robe, and all my honours.  All!

Hamton: Have all run mad but me?  O, horrible.

Good Ox-Foot, who has killed this old fat cat?
Forsooth!  Who ripped his ears and left him flat?

Ox-Foot answers that her beauty must be matched with truth: it was Hamton that killed Purrlie.

The Queen is joyed.  Now she has reason to cut off Hamton’s head.  She wants his hair, because hers has all fell out.

Enter Hamton, who says he knows not what to do.

Enter Queen, who says he must go to the Tower and await his execution.

Be not too hastie, bald madame,
Ox-Foot’s brat is eke your shame.
He scruffed the Countess, that is true,
But this young Earl was birthed by you.

Ox-Foot says that Old Hamton’s wife, a woman much given to scruffing, would not bring up their brat as hers without he scruffed her too.

The Queen is offended, and has at Ox-Foot.  In their fight each receives a mortal wound, and dies.  Slow, with speeches.

Enter Lion.  He bewails his hunger.  Purrlie’s blood tastes of nowt but ink.  He laps the Queen’s and Ox-Foot’s, and tells of the sins therein.  Then he dies, poysoned by their wickedness.

See how these hordes of imps come hot from hell
to carry off their souls.  Their bodies?  Well,
the earth will not receive them, Heaven knows.
Consign them to the dung-hill, food for crows.

“What a fool tale,” sayt my sister, when we was done.

“The lackwits called for a tale of blood and scruffing,” sayt I, “and that’s what they’ll get.”