The young cat who is wise beyond his winters gave newes that his master sent from London.  His master is son to the widow who saved the Mad Cat.  After his studies in Cambridge he went to London to learn the law.

This young cat (he is called Linkin) lodged with him there, but now has a place in the widow’s household.

Linkin told of Siffrans Take [Sir Frances Drake] who sailed out of Plymouth to distress Spanish ships and hinder their making a fleet against us.

As all know, he entered Cadiz Bay, burned or sank some ships, and took away others.  Then he made attacks on other Spanish havens, and captured a great treasure ship of Portugal that was come from the East Indies.

He sayt that the Queen had sent word to Siffrans that he must keep to the sea, and was not to have at Spanish ships in harbour nor do anything on land.

But Siffrans’ fleet was away with a fair wind, and never received her command.  Which was surely what the Queen had hoped for.

Siffrans presented her with a casket of gold chains and jewels on his return.

The Spanish are enraged.  So Lord Purrlie [Burghley] writ to say that Siffrans had not received the orders the Queen sent after him.  Even so, she was much offended by his actions.

Lord Purrlie also writ that the Queen sayt she did not yet know the value of the goods from the great ship, but believed it would be recompense for the damage the Spanish do us.

The ship has been unloaded since.  There were spices, silks, carpets, china, ebony, and other costly items, all together worth more than one hundred thousand pounds.  A monstrous sum.

The Queen has the best share of it, and Siffrans the second best.  Others who adventured in this matter have their shares too.  Though some say that Siffrans takes a good piece of every treasure before it can be valued and shared.

I liked Linkin’s newes well, because it shows how suttle great folks are.

Then that Sea Cat Nero spake very large about Siffrans, saying he had sailed with him several times.

I was tempted to call: Were this before or after you was born in Fence [Venice]?  But I held my tongue.

Nero’s a poet such as I, and ’tis our business to be liars.  Though there may be cats fool enough to believe he speaks true.  Certes, all were fire-hot for a tale from him, but Nero sayt that the nights are growing cold and he would wait for fairer weather.

Yes, thought I.  Best you pass winter by the fire, listening to more tales from your master’s pot-companions [drinking buddies] before you tell your own.

After our assembly I arrkst my sister, “Why has Nero no tail?”  For I did not believe it was took off in a fight ’twixt a Spanish galley and a Barbary corsair as he told.

“Who knows?” sayt she.  “One time he told how his mother called her kits to watch the Lord of Fence [the Doge of Venice] give a ring to the sea.  Nero was sat next to her, and she was so carried away by the spectacle that she bit off his tail and dropped it from their window to the water.” 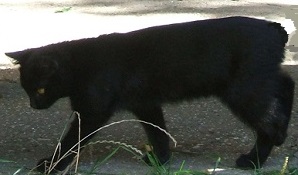 But my sister had also heared that a stranger’s ship came into Portsmouth.

A lusty black cat without a tail stepped ashore and many hot queens greeted him, calling: Hello Sailor.

“A crop of black kitlings was born without tails,” sayt my sister.  “All found employment on ships or with sailors’ wives, for black cats bring good fortune at sea.  I believe this Nero was one such.”

It never ceases to maze me how much my sister knows.

Gib probably wrote this in late September 1587.  Linkin’s lawyer master seems to have had a good ear for gossip and a sharp eye on Queen Elizabeth.

Sir Francis Drake (1540-1596) left Plymouth in early April 1587 and was back by late June from the venture that became known as “singeing the King of Spain’s beard”.  His fleet consisted of about 24 ships: 4 were the Queen’s and 1 the Lord Admiral’s; others were contributed by Drake’s business associates and a group of London merchants.  The treasure ship was a Portuguese carrack, the San Felipe, heading home from Goa.  A very conservative estimate of the cargo’s value today would be at least £20,000,000.