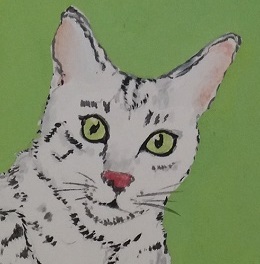 There are many comings and goings.  My lord’s friends visit him, and he rides out to visit them.  When my lord is away the fare is poor.  I get no choice of meats at supper.

When he’s here, I attend the performance of his dressing.

Oh, how his linen must be of the whitest, his colours suited one to another, his barber ever on hand to arrange his hair.

In truth, his barber has little else to do, for my lord has no whiskers to speak of.

I’ve heard talk of another performance, but I do not know what that may be.  So I keep my ears pricked, in hopes of learning something new.

And still they poets pursue him.  While my lord contemplates his image in his glass (so wide-eyed that, were he a cat, you would think he sought to fight hisself), a fellow stands by to read him his dedications.

And sometimes a poem or two.

A geck has writ on the honour of the garter, though I know not which garter it may be.  (I have stole a few from time to time.)

This poem was for another earl, not mine, but the starveling upcreeper that wrote it sought to praise my lord therein, naming him Southampton’s star.

Insolencie.  Southampton has but one star.  Me.

My lord loves to hear hisself praised.  I do believe his longing for praise is so great that even if his name were hallowed in every region of the globe it would not be enough for him.

I fear his head is fuller of wild fancies than mine own.  And I fear that some may praise him only to prey on him, while others laugh up their sleeves at him.

As some cats here make mock of me.

On a quiet day, when I was not obliged to conceal myself because of strangers in the house, I snapt a choice fish from the kitchen.  None saw me.

Then I finished the rough of a deep-brained sonnet on my divided soul.  A fine conceit on the blue coat of my friend Smokie, and my white one with blue spots.  To signify the good and bad within me.

And it joys me to write of my wickedness.

Two cats am I, of sweetness and of spite;
each in my motley coat displays his hue.
My worser spirit is a cat full white;
my better angel hath a coat of blue.
To drive me to despair, my whitely cat
doth tempt my blueish self to wicked hurts:
to seat myself within my lord’s new hat,
and set my mark upon his cast-off shirts.
As cold as wintry wastes where poor folk freeze,
or starve and shrink in hovels without fires
is that cat’s heart.  Oh, how he hates the ease
of all not in accord with his desires.
So must I live, beset by pride and doubt,
till my blue angel smokes my bad cat out.

Alas, there is none I can tell this sonnet to.  It may cause them to think me more wicked than I am.

I’m taking a short break, so there won’t be a post from Gib’s journal next week.  We’ll leave him brooding on the poets who’ve annoyed him, and celebrating his evil streak.

In 1593, shortly after the Venus and Adonis dedication, the Earl of Southampton was one of several aristocratic men and women whose virtues were extolled by Barnabe Barnes (c1571-1609) in dedicatory sonnets accompanying his not-very-readable Parthenophil and Parthenophe: Sonnets, Madrigals, Elegies and Odes.

The Honour of the Garter by George Peele (1556-1590) – “a Poem gratulatorie” – was dedicated to Henry Percy, 9th Earl of Northumberland, who was created a Knight of the Garter on 26 June 1593.  Peele, presumably with an eye to future prospects, also managed to work in a compliment to the Earl of Southampton.

I think the Earl of Northumberland paid £3 to George Peele for his poem, and the same amount to Nicholas Hilliard for his portrait.