My heart akes, and I can scarce sit to pen these words.

My sister is gone from this world.

This morning when the sun showed hisself I set forth to her barn.

I had not been there in a while, for we keep close to our homes in winter.

My sister’s grown daughter was setting the night’s catch of rats by the door.

I passed into the barn, where I saw none but the kits and a young cat or two.  All kin to me, I believe.

I thought my sister had stepped out, so settled myself to wait.

Then my little niece told me that if I sought my sister I had best go to the yard, for she was laid in a hole there.

I could not believe mine ears.  I sayt, “But I saw her not long since.”

“All saw her not long since,” sayt her grown daughter.  “But this barn is mine now.”

They told me my sister went sudden.  She sayt she was weary, and wished to rest alone in the straw.  None saw her for a day or more.  Then they heard their master say, “Our old lady’s dead.”

At first they thought he meant his mother.  Or our Earl’s.  Then they understood my sister’s sleep had been her last.

Later they heared their master tell one of his own kits that she’d come with him from the old Earl’s stable many years ago.  He did not know she’d accompanied him until she leapt from the cart that carried his goods and gear.

He sayt she was a good cat. 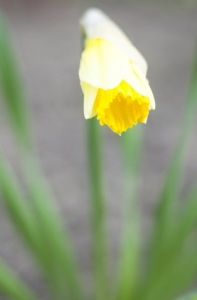 I sat a while in the barn where her scents were.

Then I walked home.  I went to my chamber and lay with my nose on my paws.

And it come to me that I’d misheard my kin-cats, and if I were to go to the barn on the morrow my sister would be there.

Then I thought of the old Earl’s stable where we were born, kits together, oft saucie to our poor mother and to our brother who was the favourite.

And of my sister’s way of making mock of me, calling me your Gibship.

When first I came to this place, how joyed I was to learn she lived near.

She’s with the Queen Cat of Heaven now, but oh, the heaviness in me.