True.  I feared my maggot had forsaken me, but I was wrong.  When I awoke this morning, he was buzzing in my ears.

I leapt onto my young lady’s pillow and sat upon her head.

She pushed me off, so I went to her table and knocked first her comb and then her beads to the floor.  Her maidservant rose and cast me from our bedchamber.  Then I ran like a mad thing to find paper, pen, and ink.

This tale is one I read long since in the Book of Changes [Ovid’s Metamorphoses?].  There was a lady who loved a bull, and she bore a monstrous brat.

My uncle forbade me to tell it.  Even though I sayt I would make her no lady, but a milkmaid.  With eyes as green as grass, skin as smooth as cream, and hair like melting butter.

My uncle lives a way off now, and the cats here will surely love a tale of horrid murders and a wicked woman.  And it come to me that I could tell it over many of our assemblies, were I to embellish it and give out a little each time.

But I will set it down now as it lies seething in my head.

In the old time there lived a milkmaid, and she was daughter to the devil.  Oh, how men went running after her!  Onlie to die of sorrow, because she scorned them all.

The devil took their souls, and their wives and kits were left to starve. 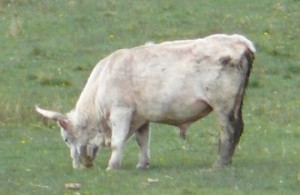 This milkmaid loved a fine bull, and promised him a pretty cow.

Then she donned her father’s leather jerkin, and braided her hair with wires so it looked like two fair horns.

You may guess what happened next.

She birthed an ugly babe that was calf above and boy below.  The midwife called for a bucket to drown him, but the wicked mother sayt, No.  She would rear her calf-boy.

For some years he did no harm.  When he was weaned he ate nowt but grass, and was most mannerly.

After nine winters a strange thing happened.  He showed that he could change his shape. He became a boy above and a calf below, and in that guise he longed for meat.

Not the flesh of beasts that eat grass, for they were his kin.  He craved the flesh of those who also eat flesh.  And as all know, we cats eat it.

The woman and her father were affrighted, and built a great maze to contain the monster.  Learned folks call this maze a laprint [labyrinth].

Then the wicked woman went about the streets and fields, offering employment to half-grown cats that had none.

She took nine young she-cats and nine young he-cats, and away she went.

Nine winters after, that wicked woman returned, offering places in her household to more young cats.  They was never seen again.

What befell all they cats?  None could say.

But I have filled my paper.  I will tell what came next when I’ve found more.

The veto Gib’s uncle placed on a tale about the Minotaur is in 8: A Painful Interview.