The master’s daughters had taken two books from the book-box.

From one they read some bawdy verses that made the maidservants merry.

After casting that aside, they busied theirselves with the other book.  A tale of old kings.  It seemed dull to me, though they hoped it were scandalous.

Then they sayt they would wait for their brother to come from school, for they thought he might find some scandal in its Latin words. 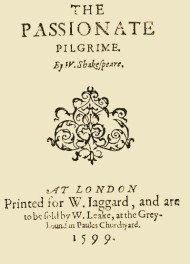 I sat upon the book of verses, and saw a name that remembered me of my days in the book room of our Earl’s house at Titchfield.

An upcreeping ear-licker that sought money from our young Earl.

He’d offered him two poems that were lascivious and lustful.  Or so my uncle Gib sayt.

And when my uncle was ill-humoured he would set his mark upon the stack of papers wherein those poems lay, saying, “A salute to Snakes-Purr.”

I never troubled to read them.  So, curious to know what this fellow could do, I knocked the book to the floor to peruse at leisure.

I’d scarce nosed it open when some words flew off the page and impressed theirselves so deep in mine eyes I fear I shall never be rid of them.

When my love swears that she is made of truth,
I do believe her (though I know she lies),
That she might think me some untutored youth,
Unskilful in the world’s false forgeries.

I’d heard those words before.  Or some very like.  In a sonnet writ by my uncle Gib as a compliment to our friend Nero.

When my friend swears his tale is made of truth,
Then tells me of his tail, I know he lies.
Yet his words show he’s no untutored youth,
Unskilful in a poet’s forgeries.

That’s all I know.  I could make neither head nor tail of the rest.

Or I should say neither tale nor tail, for my uncle then addressed the matter of true tales and imagined tales.  Or tails.  And how a poet’s imaginings might make a tale (or tail) of truest truth.

“Do you tell me,” arrkst Nero, twisting to look behind him, “that my tail which none has ever seen, is truer than the tail all see on you?”

“Deep-arsed, more like,” sayt Nero.  “And when our Earl next fails to see the lie of your tail and treads on it, you’ll know it’s true.”

My uncle was offended.  And I thought no more of that sonnet until I saw its false forgery before me.

I turned a page, and more words came at me.

Two loves I have, of comfort and despair,
That like two spirits do suggest me still:
My better angel is a man (right fair),
My worser spirit a woman (coloured ill).

I’d read that before.  Another of my uncle’s platonick conceits, this time upon his divided soul.

Two cats am I, of sweetness and of spite,
Each in my motley coat displays his hue.
My worser spirit is a cat full white,
My better angel hath a coat of blue.

I was so mazed I laid me down ’neath the table to gather my wits.

My uncle had wished to see his play imprinted, but this book of verses was none of his doing.

And did he not leave all his papers to me, his niece and executrix?

I looked for Linkin, but he was nowhere to be seen.

Out with his law cat friends, no doubt, boasting of their learning and their wit.

Then we heared at the door not the schoolboy but the master.  The girls seized the books and put them in the box.

Linkin hastened in behind him.

I ran to Linkin and sayt, “I have need of your advices.  Two of my uncle’s sonnets are writ anew and imprinted.  Is this a felony?  Can the knave be punished?”

“Hear this,” sayt Linkin, scant of breath.  “The Earl of Essex has come from Ireland, clean contrary to what Queen Puss commanded.  Some say our Earl is with him.”

Nowadays five of the 20 poems in The Passionate Pilgrim are attributed to Shakespeare: the sonnets which upset Tricks, and three from the recently printed play Love’s Labour’s Lost.

Why was Shakespeare’s name on the cover of  The Passionate Pilgrim?  Well, in 1599 he may have been better known as a writer of amorous verse than as a playwright.  The best-selling Venus and Adonis (1593) had its 5th and 6th printings in 1599.  The printer of The Passionate Pilgrim probably hoped his name would help sales.

Unfortunately the first-mentioned of Gib’s sonnets hasn’t survived in full, but the second one is here.

The other book taken from the book-box, “a tale of old kings” was indeed scandalous, and would get to be even more so.

The First Part of the Life and Raigne of King Henrie IIII by John Hayward (c1564-1627), lawyer and historian, was published in February 1599 with a brief dedication in Latin to the Earl of Essex.  The book dealt mainly with the downfall of Richard II, who was deposed by Henry IV.  It sold well.

Deposition of a monarch was a sensitive topic.  The Earl of Essex instigated the removal of the dedication from unsold copies.  That made the book even more popular.

A second printing, without the dedication but with a defense by John Hayward of his work, was seized and burnt.